Yes, this article is a couple months old, but I’m sure a lot of my friends and contacts who work for telecom carriers don’t follow news items like this particularly closely (you know who you are) but would still be interested in the results of the Infonetics study quoted in the article.

As the article notes (and here’s the link to Sean Buckley’s FierceTelecom article one more time, just for good measure, before I quote it): 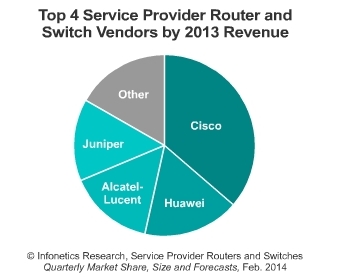 Nothing much to see here, though revenue is slightly down.  Cisco, Huawei, Alcatel-Lucent, and Juniper still dominate.

Carrier router/switch data may not keep us yawning for long, though, as Infonetics analyst Michael Howard says “change is in the air.” You can read more about that here, in the Infonetics press release about the report featured in the FierceTelecom article.

Yeah, not my sexiest post, but I had this article squirreled away in hopes I’d get the blog up and running so I could share it.  Indeed, you can trace my interest in switch vendors back to my years working with ILECs.  If you’ve read this far, perhaps that’s where you developed your interest, too.

I've spent more than 20 years in the telecom and high tech industries. I'm an "analytical guru, seer of trends and opportunities." In other words, I've been a telco cost/economic/financial analyst. I've also been an industry analyst who has written reports covering several telecom market segments, including some key markets when they were in their early stages (such as fiber-to-the-home and competitive carriers). Beyond telecom, my tech industry coverage has included IT markets from comprehensive to detailed, plus special projects covering industries including such disparate industries as air conditioning, eCommerce, and population migration and remittances. I leverage this background when writing for my Geoff Wilbur's Telecom and Tech Blog. I was also a widely published music journalist 1989-2003. I then placed my music journalism gig on hiatus... until Fall 2015 with the launch of Geoff Wilbur's Music Blog. View all posts by Geoff Wilbur

This site uses Akismet to reduce spam. Learn how your comment data is processed.